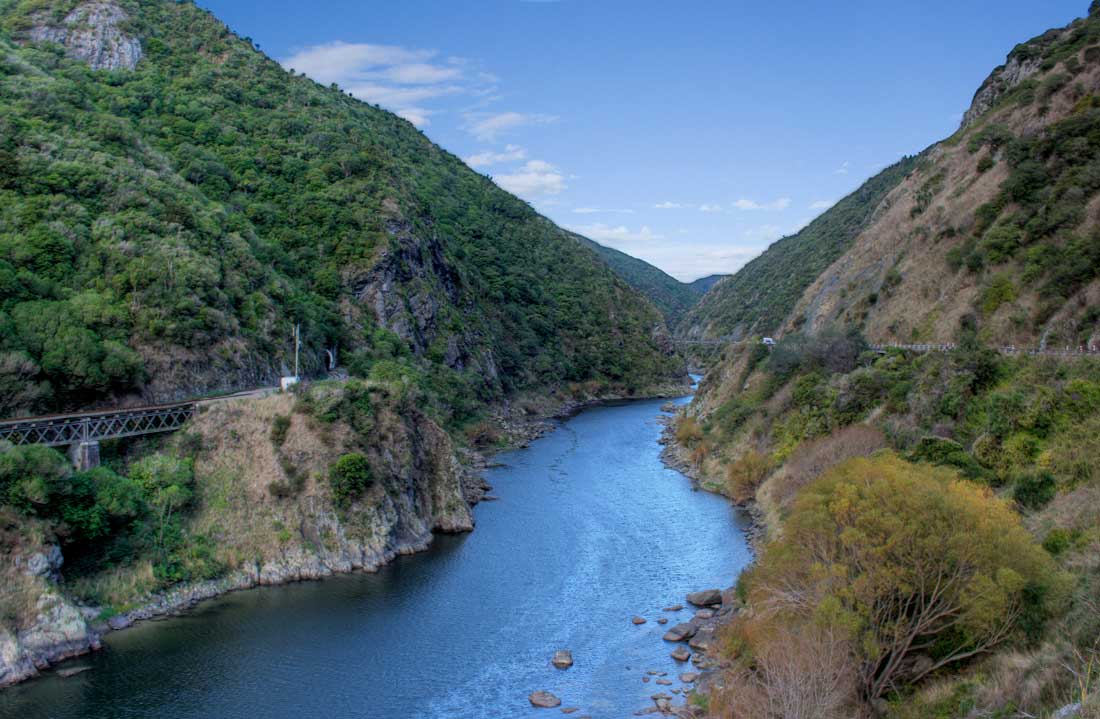 Manawatu Gorge is significant because, unlike most gorges, the Manawatu Gorge river is a water gap, that is – it runs directly through the surrounding ranges from one side to the other. This was caused by the ranges moving upwards at the same time as the Manawatu Gorge was eroded by the river, instead of the more usual erosion of an already existing range.

The railway through the gorge was contracted for in 1886 and the line was completed in 1891 and the first train over it carried 1500 passengers in eighteen double carriages.

White Horse Rapids Manawatu Gorge: The formation of the Tararua and Ruahine ranges began about 1.5 million years ago. The rising of the greywacke ranges combined with erosion by the river has formed the steep Manawatu Gorge.

Native trees and plants in the Manawatu Gorge include tawa, tarata, mahoe, rewarewa and kawakawa. Also present are nikau palms, whauwhaupaku (five finger shrubs) and the giant maidenhair fern which is rarely found outside of the Manawatu. Birds present in the area include tui, tomtit, harrier hawk and grey warbler.

The Department of Conservation has a walking track on southern side of the Manawatu Gorge over the top of the Tararua ranges, through the bush, with some views of the wind farms. At the eastern end of the Gorge is the Balance reserve and picnic area. Here you’ll find the “Beyond the Bridge” cafe. At the western end is the Ashhurst Domain and river access – and the Cafe Domain.

Once a year, charitable groups organise the very popular Tunnel Walk, walking the length of the Manawatu Gorge on the railway tracks and through the tunnels.

Book Direct
for the best price